An important property of a resonant circuit is its bandwidth. Bandwidth is defined as the size of frequency range that is passed or rejected by the tuned circuit. To help understand bandwidth further let’s think about a radio. When you turn on a radio and you try to select a radio station, what you're doing is using the bandwidth characteristics of a tuning circuit in the radio to select your particular station. Another name for the tuning circuit is a resonant circuit. A resonant circuit has a specific frequency and bandwidth and we put that to use in the radio receiver.

Resonant can be obtained in either series or parallel circuits containing three electrical characteristics namely; resistance, inductance and capacitance. The resonant circuit below consists of a resistor, an inductor and a capacitor in series with a current meter and a voltage source. The voltage source represented by an AC symbol, is also variable in frequency. Most commonly, we use one particular AC voltage: 120 volts 60 Hz, but in this case we're very interested in the frequency being variable so it would be some value other than 60 Hz. 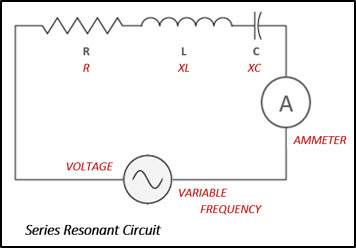 The current in the circuit can be measured with a meter or, we could calculate the current using a form of Ohm's law, which is – current (I) equals the applied voltage (E) divided by impedance or total opposition in the circuit (Z), i.e. Current = Voltage/Impedance, I = E/Z. A series-resonant circuit offers low impedance to the flow of current at a particular frequency. The circuit is said to be resonant when the frequency of the applied voltage is adjusted to produce maximum current while the magnitude of the voltage is held constant. The frequency of this voltage and current is called the resonant frequency, and is defined as the frequency at which a given system or object will respond with maximum amplitude.

In the series RLC network the impedance is defined by the equation: 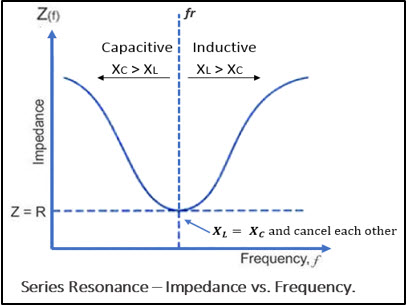 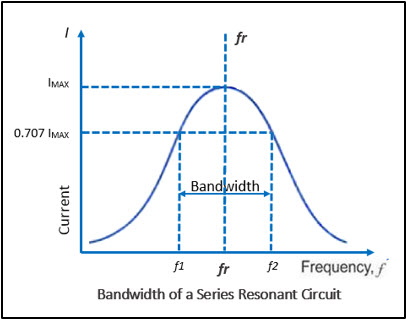 The resonant frequency can be determined from the critical frequencies by the following equation:

Bandwidth can be expressed mathematically as:

Other formula used to calculate bandwidth is:, where the Q factor is a measure of the quality of a resonance circuit represented by the letter Q. Q factor is calculated using the formula:

What is the bandwidth of a resonant circuit with a frequency of 28 MHz and a Q of 80?

Timothy, our Support Team is…

Timothy, our Support Team is available to help all Electronics Technician students by phone, toll-free at 1-866-279-1457 or email support@gbctechtraining.com.

The Support Center is open for extended hours on Monday to Friday, 9 am - 10 pm in the evening and on Saturdays & Sundays from 9 am - 5 pm (EST).