Over the next decade, around 3.5 million US manufacturing jobs will need to be filled, as many skilled workers from the baby boomer generation plan to retire in the next few years. The industry’s workforce is aging at a faster than normal rate—and what’s more, the skills required to do their jobs will be substantially different than the skills currently prevalent in the younger workforce. This skills gap, as well as the lack of interest from younger workers, has manufacturers casting about for innovative solutions to the problem. 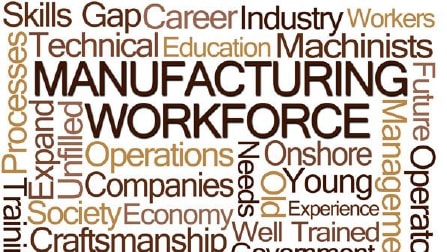 This skills gap means that filling 2 million of the 3.5 million jobs in manufacturing may be difficult, according to a report in 2015 from Deloitte and The Manufacturing Institute. 78 per cent of CEOs surveyed in the report said the gap in skills would hamper their ability to increase productivity and roll out new technologies, while 82 per cent said that they would be less able to meet customer demands.

The problem is nationwide, and has manufacturers worried. "What we have found out is that as we raise the bar, we're finding it a little bit difficult to get a pretty good population or a subset of folks that we can pick from to fill those needs," said a GE Aviation business operations leader. A growing economy is usually a good thing, but to take advantage of it, some things are going to need to change.

In New Hampshire, the low unemployment rate (at 2.8%, one of the nation’s lowest) is nominally a good thing—but it means that the local labour pool is rather shallow, leading to a ticking time bomb. Federal and state data show that nearly 60 per cent of New Hampshire’s manufacturing workers are 45 and over, compared with 49 per cent nationally. Also, the number of the state’s manufacturing workers aged 35 to 44 fell by almost 50 per cent between 2004 and 2014. And subsequently, around 80 per cent of jobs over the next ten years will be replacing outgoing workers.

The governor of New Hampshire, Maggie Hassan, recently announced an initiative to bring educators and manufacturing companies together so that they can figure out the skills needed to fill the gap. Also, businesses are beginning their own programs and internships to try to convince younger workers that the dangerous, dirty work that their parents and grandparents did isn’t what manufacturing is about anymore. Some are considering hiring incentives as the competition for skilled labour heats up.

One way to ensure that the workforce is sufficiently equipped to deal with this technological change is to highlight online technology courses that workers can take to help them to obtain the skills required to fill the upcoming manufacturing job vacancies. According to the Economic Policy Institute, a liberal-leaning think tank, federally collected jobs data show that for every available manufacturing job there are two unemployed workers. Elise Gold, a senior economist at the institute, thinks that employers looking for workers could do more to help train those who are already available, saying: “Actually, there's a lot of unemployed workers in that field that you're trying to hire in.”

George Brown College for example runs a variety of online technology courses that are geared towards improved adult education in technical fields, such as in skills that will help them to become a PLC programmer or an Electronics Technician, both areas of employment that are underrepresented and will only be more in demand as the technological level of factories increases. The college provides a certificate of completion and the programs are designed to provide students who cannot attend college on a full- or part-time basis with a self-paced distance-based educational alternative.

Is there a way to get the PLC Certificate with the Electronics Certification?
I want Both Sets of Training .